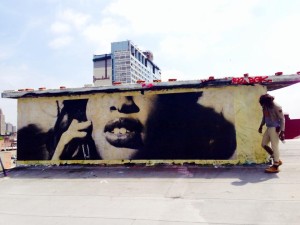 Throughout Baltimore and New York City, luis is known for his striking images of people.  He has taken photos all over the world including Zhengzhou, Seoul, London, Madrid, and  Burning Man.  luis is a street photographer and he captures his photos very quickly with a camera in one hand and a flash in the other.  This photo was taken of a woman at Gay Pride Baltimore while she was crossing the street and talking on her cell phone.  luis took the photo so quickly that the woman was unaware of what was happening until the photo was already captured!  While luis cropped the woman’s eyes out of this large polypasted piece, you can view the original photo here!