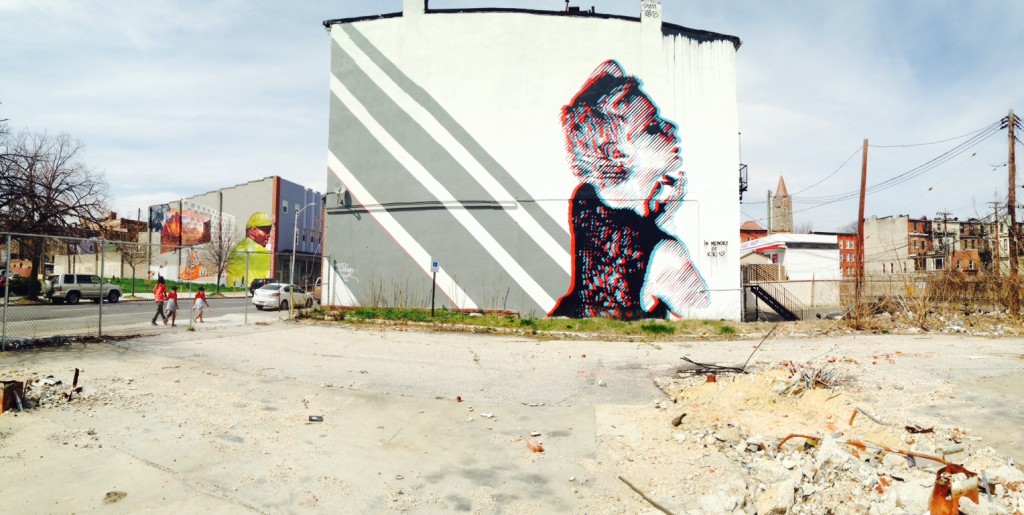 This anaglyphic 3D mural was completed in August 2012.  Anaglyph 3D is a form of stereoscopy 3D that is created by bringing together two chromatically opposite colored images.  When the images are viewed through corresponding colored 3D glasses, the two separate images are merged together in the brain giving them the perception of depth and solidity. In this case, two slightly different images of the woman are showed and when the mural is viewed with red/cyan 3D glasses, it will seem like she is popping out at you!

Something else that is interested about this mural is that it was funded by a Kickstarter created by the artist Richard Best (Xxist).  The Kickstarter was launched in June 2012 and after one month, the project has raised $4,057 with the assistance of 57 backers!  A final mural design was voted on and after the mural was completed, contributors were invited to an unveiling party in the Station North Arts District where they could pick up their 3D glasses to view the mural.  A documentary associated with the mural was also released in 2013.  No mention who “Kiki” is though.  There must an interesting story behind that too!